SOPOT IN THE TIMES OF JOHN FALTIN

The years of John Faltin’s photographic activity coincide with the period of the intensive development of Sopot. Faltin’s photographs act as a documentation of the changes that took place in the town, portraying the most significant buildings and streets, as well as panoramas that allow to trace the spatial developments of Sopot. Though the first written records of the town date back to the 12th century, and from the mid-16th century the patricians of Gdańsk began leasing land here from the Cistercians of Oliwa and later built their summer residences, it was only the creation of the Sopot resort in the 19th century that truly contributed to the flourishing and expansion of the town. 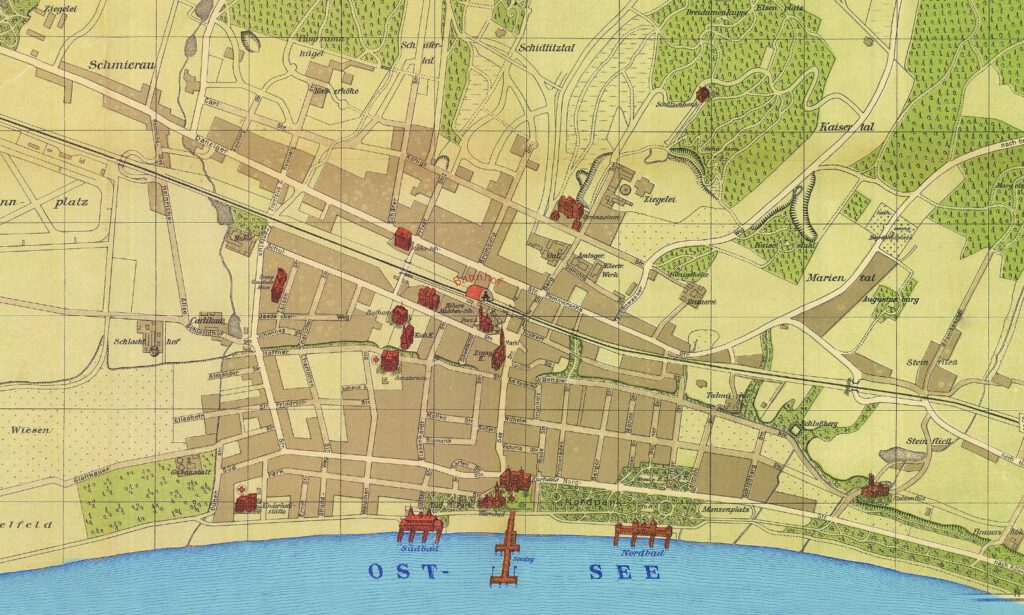 Plan of the city of Sopot, published by Pharus Verlag, 1909 r., collection of the Sopot Museum

Particularly important events included the launch of a railway between Gdańsk and Koszalin in 1870, and the later introduction of a suburban railway to Gdańsk in the 1890s. The brick building of the station, luggage room, water station and today’s platform no. 1 were erected in the years 1868–1870. A second track was then created, and, at the beginning of the 20th century, a modern platform was built next to it.

The main arteries of Sopot were today’s Niepodległości Ave, leading from Gdańsk to Berlin, as well as the current Bohaterów Monte Cassino St, crowned by the pier. The most important buildings that served the bathers were located in its vicinity: the Spa House, Bath House and the baths themselves. Lower Village, along with its meadows, were successively developed. Today’s Jana Winickiego, Jana Sobieskiego and Alfonsa Chmielewskiego streets were created. The next important streets became today’s Powstańców Warszawy St, Grunwaldzka St, Jana Jerzego Haffnera St, Fryderyka Chopina St, 3 Maja St and Tadeusza Kościuszki St. Even in the 1880s, the buildings in Sopot were quite low and modest, with the only exception being today’s Obrońców Westerplatte St, where the wealthy residents of Gdańsk built their stately villas. Every year, the network of streets grew denser, with single-family houses, guesthouses and hotels being built.

In 1877, the municipal authorities bought the spa buildings from the heirs of the Böttcher family. In the years 1880–1881, the second Spa House was built according to the design of prof. Carl Schwatlo, a well-known Berlin architect. The building, facing the sea, was constructed using a timber frame. The main body of the building with a restaurant, ballroom and reading room was flanked by two towers. Symmetrical wings of hotel rooms branched out from it. In front of the building, the representative Spa Square was built, surrounded by wooden walking galleries leading to the pier.

In 1887, a children’s sanatorium was founded by Luise Abegg in the coastal strip south of the pier. The neo-Gothic style building was designed by the builder Nienburg. In 1900, the sanatorium had 100 beds for patients aged 4 to 17 suffering primarily from tuberculosis.

The 1890s are considered the start of the construction boom in Sopot, with the appearance of multi-storey tenement houses and grand single and multi-family villas. At the time, imposing villas were erected in the area of today’s Tadeusza Kościuszki and Dębowa Streets. A new town square was created at the present Konstytucji 3 Maja Square. The particularly popular architects at that time were Carl Kupperschmitt, Wilhelm Werner, Felix Dost, Walter Schulz and Wilhelm Lippke, who designed the Fast department store and tenement houses at today’s Bohaterów Monte Cassino St (no. 19, 31, 33–39). Thanks to the drainage of the moat by the French Manor, the current Władysława Jagiełły St was established, and parcels of land by the northern part of today’s Tadeusz Kościuszko St were built over.

At the end of the 19th century, there were following hotels in Sopot: the Kaiserhof, the Victoria Hotel and the Petersburger Hof. In 1897, at the corner of today’s Bohaterów Monte Cassino and Grunwaldzka Streets, the Werminghoff Hotel was erected, designed by Wilhelm Lippke for the famous Sopot entrepreneur, Hugo Werminghoff.

An event that contributed to the extraordinary development of Sopot was the granting of its city rights on April 1, 1902. Volkmar von Wurmb from Berlin became the city’s first mayor. Paul Puchmüller, who had previously held the position of the municipal builder, was appointed as the city architect. It is he who is considered to be the creator of the main urban layout of the city. Puchmüller supervised, designed, or co-authored the most important buildings in Sopot.

A two-story villa at today’s Tadeusza Kościuszki St, bought from the Fewson family back in 1900, was chosen as the headquarters of the city’s magistrate. After 8 years, the building turned out to be too small, and a new, grand town hall was built in its place.

However, the first major investment of the young city was the construction of a modern Bathhouse in 1903–1904. It was designed by Paul Puchmüller in collaboration with Heinrich Dunkel. The building with a characteristic high chimney refers to Renaissance and Baroque architecture with Art Nouveau elements.

During the same period, the city architect designed the Northern Baths, followed by the Southern Baths in 1907.

In 1908, the city announced a competition for the construction of a new spa house, which was won by the design of Carl Weber, a professor at the Technical University in Danzig. Paul Puchmüller and Adolf Bielefeldt helped him with the final draft of the project. The third Spa House consisted of a complex of buildings surrounding the Spa Square. The main building, perpendicular to the shore, housed representative rooms – a theater and concert hall, the so-called Red Room, a reading room, a billiard room, a café, offices and utility rooms, and a restaurant with spacious terraces overlooking the square. The north wing was occupied by a hotel. The Spa Square was surrounded by new walking galleries.

At the same time, the four-storey Metropol Hotel, designed by Wilhelm Werner, was erected at the corner of today’s Bohaterów Monte Cassino and Królowej Jadwigi Streets.

At the beginning of the 20th century, two new churches were built in Sopot. The first is the Evangelical Church of the Redeemer, which would become the Roman Catholic garrison church of St. George after the end of World War II. The building was erected in one of the most representative places on the grounds of the former gardens which surrounded the French Manor. The construction was financed by Emperor Wilhelm II and his wife Augusta Victoria, as well as the residents of Sopot. The Berlin architect Ludwig von Tiedemann, who was the author of numerous sacred buildings, designed the neo- -Gothic style church. In 1911, the Roman Catholic Stella Maris church of Our Lady of Assumption was built at the back of the town hall. This temple was also designed in the neo-Gothic style.

Another important investment was the construction of a tunnel under the railway tracks and a viaduct at the newly created Podjazd St. (German: Grosse Unterführung, meaning a large underground passage). The street was meant to be the main passage connecting Upper and Lower Sopot, which had been separated by the railway line for decades.

The young city also placed emphasis on the development of education. The first decade of the 20th century marked the expansion of the “old gymnasium” at today’s Tadeusza Kościuszki St., the construction of an elementary school at today’s Wejherowska St., as well as a school for girls at today’s Niepodległości Ave.

However, the most important project was the construction of the Realschule (secondary school). The neo-baroque building designed by Paul Puchmüller was erected in Upper Sopot at today’s Armii Krajowej St. The aim of the prestigious school was to prepare the future staff of state services, as well as future technical school students. A fire station with a high tower for drying fire hoses was built near the school building.

The location of these buildings in the upper part of the city was a result of its expansion into the Sopot forests and picturesque valleys. An example of a street that used nature to its advantage is today’s Wybickiego St, which passes through Dolina Owcza (Sheep’s Valley).

In addition to the establishment of housing, the city authorities tried to increase the appeal of the city by building more recreational areas. In 1897, tennis courts were built near the Northern Park at today’s Powstańców Warszawy St. The following year, a horse racing track was created near the manor house in Karlikowo. In 1908, the city’s first sledding track was established in the Dolina Prątki (Prątki Valley), and, in 1909, the Forest Opera was built.

The outbreak of World War I caused a decrease in the number of holidaymakers coming to Sopot, which put a halt to the city’s development.