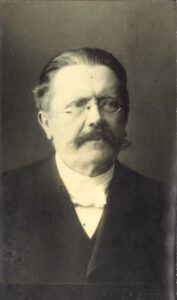 John Faltin (Johannes Theodor) is one of the most important photographers throughout the history of Sopot. Though professional photographers from Gdańsk took photos from holidays in Sopot many years before him, John Faltin was the first resident to document the transformation of the summer resort into a wealthy and trendy city, which he did for nearly 20 years.

Two main factors influenced his artistic path. The first, and most important one, was his relationship with his family. John Faltin was born in 1846 in Gdańsk, at a time where photography already existed. His father Heinrich very quickly began appreciating the advantages of the new invention and regularly visited photo studios in Gdańsk with his family every few years. Thus, a fascination with the new medium was instilled in his children from an early age. However, it took more than thirty years for John Faltin to be able to take the photographs himself, because the second aforementioned factor was the development of photographic technology.

The age of photography began on August 18, 1839, when Louis Daguerre’s groundbreaking invention was officially showcased in Paris. 1840 marked the arrival of the first Parisian camera in Gdańsk and, shortly after, pioneering daguerreotypes with views of the city were taken. In 1841 in Vienna, Joseph Petzval presented a new lens that significantly shortened the exposure time and gave rise to professional photography. In large cities, the first photography studios began to appear very quickly, offering portraits on a copper plate – only in one copy.

In May 1843, there were already three photography studios in Gdańsk, and one of the first clients of Eduard Deplanque’s Atelier was John Faltin’s father, who visited the shop on Tkacka St with his whole family and ordered a portrait of his four children. It is the oldest known daguerreotype made in Gdańsk and is currently in the collection of the National Library of Finland in Helsinki. In the summer of the same year, portraits could also be taken in Sopot. A pharmacist, Lipowitz from Poznań, came for a short vacation and for a few days offered portrait services in the garden of the French Mansion.

In the following years, the Faltin family grew and, around 1851, John’s father planned to take another family portrait on a copper plate. Five-year- -old Johann visited a photography studio for the first time, where he stood in front of the camera with his mother and four brothers. Only his sister, Rosa, and eldest brother, Hermann, who left for Berlin, were missing in the photo. It was also the last photo with his brother, Richard, who would leave Gdańsk forever a few years later. In 1856, Richard Faltin moved to Finland. From then on, family photos were sent to Richard on a regular basis. Fortunately, a new technology appeared in photo shops, which significantly lowered prices and, above all, allowed several paper prints to be created from one glass negative.

In 1855, the photographic revolution of carte de visite, i.e. portraits on cardboard in the 9.5 x 5.5 cm format, began around the world. In 1861, Johann Faltin went to the photographer and commissioned his portrait in the format. Then, he sent one of the prints to Finland. In the same year, an important family celebration took place. On August 29, 1861, Rosa Faltin became the wife of a young merchant, Constantin Zimssen, who came to Gdańsk and became the owner of a reputable bookstore at 55 Długi Targ.

In the following years, young Johann was preparing to become an accountant and merchant, and the whole family lived in a tenement house on today’s 13 Długa St. Meanwhile, the Ballerstaedt photo shop, where the king of Gdańsk photography, Rudolf Theodor Kuhn, worked, began operating in a neighboring tenement house. John’s father soon commissioned him to take a commemorative photograph of the shop on Długa 13. The summer of 1863 also marked the beginning of Sopot’s photographic history, when Richard Gottheil, a Gdańsk photographer, came on vacation with his camera and made one of the first glass negatives.

After completing his education, Johann Faltin worked as an assistant in his father’s business for a few years and then left Gdańsk in 1873. The Belle Époque began and he set off on a journey around Europe which lasted several years. His brother, Franz, most likely accompanied him during these travels. The Faltin brothers lived in various countries and regularly sent photographs to Richard. In 1875, John’s father fell ill and sold the family business two years before his death. His mother Emma, brother Hermann and sister Rosa remained in Gdańsk. The key family events that influenced John’s fate took place in 1890. His brother Franz died in England, his mother became very ill, while his sister moved to Sopot with her family.

In the autumn of 1891, Johann returned to Gdańsk as John Faltin, which may indicate that he spent the last years with Franz in England. There, at the age of 40, his photographic adventure began. It was possible only thanks to the new technology of the so-called dry board that, since 1883, was commonly available. Each bookstore sold a set of factory glass plates that were ready to be used in a camera. It caused a drastic change in the work of photographers and also gave rise to amateur photography. After taking the photos, the only thing that you needed to do was develop the negative and make prints in the nearest photo shop.

After returning to Gdańsk, John Faltin was already a practicing photographer, and, based on the preserved photograph of St. Dominic’s Fair from August 1892, it is known that he already used the latest C.P. Goerz camera, equipped with an Anschutz slot shutter and five replaceable cassettes. It is worth adding that this camera appeared on the market in the summer of 1889 and allowed 10 instant photos in the 9 x 13 cm format to be taken.

In 1892, the Faltin family sold the family tenement house on 13 Długa St and, in October, they all moved to Sopot. Six months later, John’s mother passed away at the age of 85. John initially lived on Seestrasse 44, in the house of his sister Rosa and her husband, the bookseller Ziemssen, but soon moved to a townhouse on Danzigerstrasse. Everything indicates that John Faltin worked in his brother-in-law’s company as an accountant, and started photographing Sopot in his spare time. One of the oldest photographs by John Faltin shows a new tenement house by the town square in Sopot, in which Constantin Ziemssen opened a bookstore and music shop in 1895.

Fortunately, John and his camera showed up in Sopot at the right moment. After the railway line was put into operation in 1870, Sopot was gaining in popularity, and the purchase of the bathing complex by the municipality in 1877 began a major reconstruction of the seaside town. In the following years, Sopot was developing very dynamically and was eagerly visited by professional photographers from Gdańsk. In 1876, Rudolf Rogorsch took one of the first photos of the permanent pier, and two years later Rudolf Theodor Kuhn arranged a summer photo shoot in Sopot. In the summer of 1891, Adalbert Gottheil showed up with a camera, and a year later, a series of photos was taken by Wilhelm Dreesen from Flensburg, who was preparing to publish a large photo album with views of Gdańsk and the surrounding area. At that time, all photos were sold in various formats only in the form of albumin prints, which were glued onto paperboard. Wealthy amateurs like John Faltin could order a photo print from a photo shop, but they usually did it for their own use. It was also not without significance that only recently in Sopot there were several branches of Gdańsk shops, which mainly offered portrait services.

However, everything changed in 1896 when the first photo postcards appeared on the market. High-quality photo printing led to their mass production and low price, which made it possible to earn good money. From that moment on, John Faltin began to regularly photograph Sopot, and his brother-in-law became the first publisher of John’s photographs in the form of printed postcards. Since as early as 1898, Ziemssen’s bookshop offered a large selection of views of Sopot and the surrounding area.

The huge popularity of Sopot among tourists also translated into the holiday postcard market, which is why John began selling his photos to other publishers after a short time. His photographs have been published in several books and guidebooks, but the largest collection of his works has been preserved as postcards. In my opinion, the vast majority of Sopot postcards from 1899–1913 show photos taken by John Faltin, but not all are signed with his name. There are also postcards with views of Gdańsk, Oliwa, Hel and Łeba, and many more of his photos are yet to be discovered.

John Faltin was interested in photography from an early age, but he could not start his real adventure with the camera until he was 40 years old. He was financially independent, had a sense of artistry and, above all, was a careful observer of life in Sopot. In 1901, Sopot was granted city rights, and for the next fifteen years John documented important events and the changes taking place in the Sopot landscape, which is why he undoubtedly deserves the title of the first photographer of the city of Sopot.